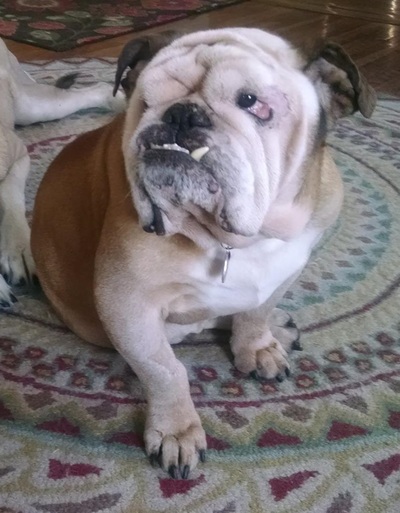 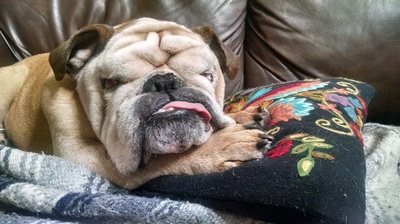 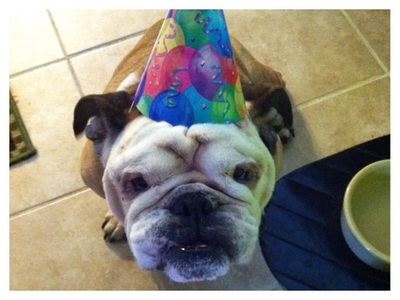 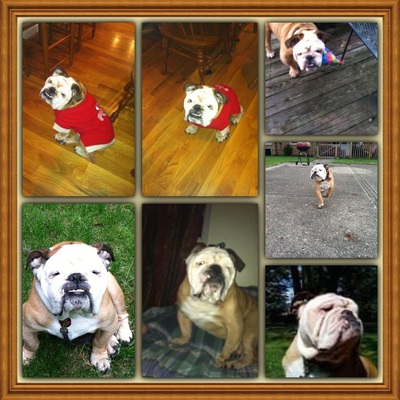 
Intake Date:  2/12/15
Last Update:  3/8/15
Age:  8 years
DOB:  9/13/06
Gender: Male, neutered
Weight:  51 pounds
Energy Level:  Low
Color & Markings:  Fawn & white
Good with other dogs:  Yes, but does best with non-dominant dogs & can be an attention hog
Good with cats:  Yes
Good with kids:  Yes, 8 years & above - sometimes he gets excited and doesn't know his strength
Object Aggression:  None
Special Needs:  History of ear infections
Medications:  Eye drops daily; ear wash weekly
Crate Trained:  Unknown
House Trained: Yes
Physical Fence Required:  Preferred; he could be a runner
Adoption donation:  $200
Full bio (updated March 8):  Please Bazul!  He is a beautiful fawn and white bulldog, who weighs 51 pounds, and has the cutest underbite!  He came to us as an owner surrender due to unfortunate circumstances/health issues with his owner who had him since he was a puppy; his owner loved him very much but just could not care for him any longer.  So we took him in, got his medical needs taken care of, and he is now ready for his forever home!

Bazul is an easy going old dude, who just wants to hang with his people and chill out.  This boy is a total lover!  After he was released to BBR he underwent double entropian surgery on his eyes, had 17 teeth extracted, and was neutered – all of which he handled like a champ!  The eye surgery was pretty extreme and his eyes are very droopy… but they have continued to improve as he heals, so he looks a little better every day.

During the day, Bazul pretty much hangs out on the couch, and in the evenings he likes to be wherever his people are.  He likes to hang out on the couch, and will lay curled up with his head in your lap.  Sometimes he can get over enthusiastic, and will climb on you.  And when he’s excited, sometimes he does a little snap thing - it is not aggressive, just over enthusiastic.   He is still pretty strong, so he will need a home with kids 8 years old and older.  It’s preferred that he go to a home with a fence; he does not seem to know any commands and could be capable of wandering off.  He would need to be fully supervised/leashed if outdoors without a fence.

Since his tooth extraction, his fosters have been soaking his food, but he does eat well.  He is housetrained and always goes outside to potty.   Bazul does do well with other dogs, but he can be an attention hog;  he will run right over if you are giving one of the other dogs attention.   He was an only dog in his old home, and his owner had him from puppyhood, so he has no boundaries - all beds, toys, and bowls are fair game in his estimation!  Bazul likes to sleep in bed with his people, and has quite the bulldog snore.  He is such a little ball of love!

Bazul is really just an easy and very loving old soul.  He would likely do best in a home with other older (preferably female) dogs, and adults and older kids where he could live out his remaining years in a calm and loving environment.  He is neutered, up to date on shots, and housetrained.  Please consider opening up your heart and giving Bazul his loving furever home!

February 26 update:  Bazul has been in his foster home for a few days, and so far he appears to be an easy going old dude who just wants to chill out. He has just been through double eye surgery, the extraction of 17 teeth, and a neuter, but he has handled it all like a champ!  He really likes to hang out with his people and loves attention.  Bazul is mostly laid back, but can get pretty excited at times.  he is a total lover!

Intake info:  Bazul is an owner surrender due to unfortunate circumstances/health issues with his owner who had him since 5.5 weeks.  He needs vaccinations, teeth cleaning and has possible ear infections.  His owner loves him very much but cannot care for him any longer.  He has a typical bullie demeanor and is just a love bug.  Once we get to know him better in foster care we will post more updates.