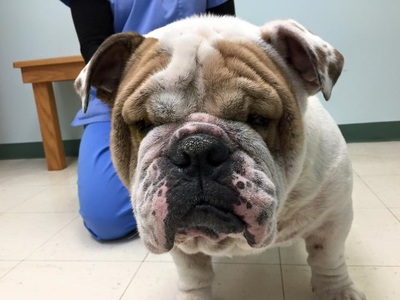 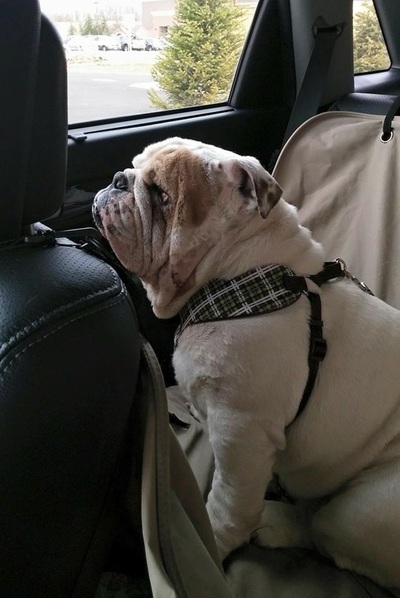 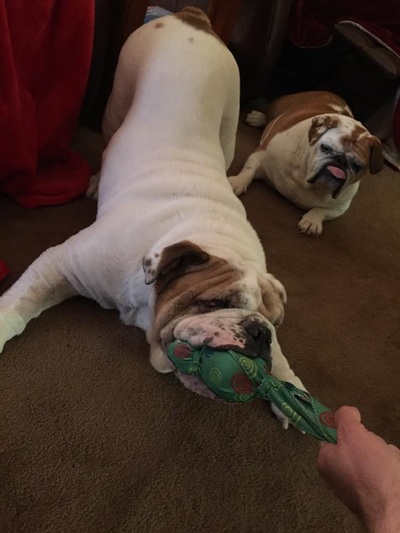 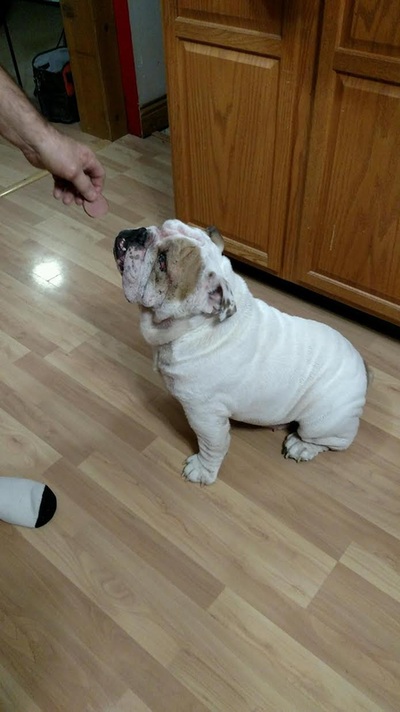 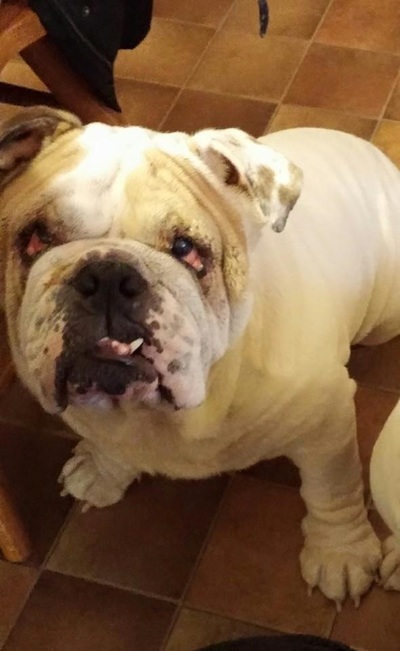 May 20 update:  Bogie just had a follow up eye surgery to correct a couple issues & he did great! He will require daily eye drops to keep them in tip top shape from now on. He also requires daily thyroid medicine to keep his svelte figure. He happily takes them both.
Bogie gets along with great with adults, kids & other dogs. Because of his VERY LIMITED SIGHT, he can't be in noisy places. If he can't see, or hear, he gets very scared. He will bark at other dogs if they come near him, so be aware, and move him to a quieter place.
He loves children, but because of his size, and the fact that he can't see very well, he may knock little ones over. He does great on a leash, and loves to go for walks, however he will move slowly, and tries to follow close to you, so try not to trip! Bogie also loves his toys, and has one in his mouth at all times, including while he sleeps. He sucks on them like a pacifier. He is crate trained and should be crated when no one is home because he tends to have a little separation anxiety. He loves to cuddle, and will follow you all over the house. Bogie must be kept on a strict diet. He is highly allergic to poultry. We have been giving him Benedryl daily just in case food falls on the floor, and he gets a hold of it. If he has a reaction, he will turn red and start itching. The Benedryl takes care of this very quickly, so we just make sure we're ahead of the game. Bogie is a happy and loving dog, and would fit into any home.

March 25 update:  Bogie is doing great! He had 2 masses removed from his neck, and neither were cancer! The stitches have been removed, and his fur is already filling in. His skin is all cleared up from his allergies, and his eyes have healed from surgery. Bogie will require daily medication for his thyroid, and daily eye drops for dry eye. Both are taken without a problem. Bogie is very submissive and gets along with great with other dogs. He loves people, and even with his limited eyesight, he is not spooked by strangers petting him.  He is a wonderful boy, and he will steal your heart.

March 1 update:  Bogie's eyes are healing up nicely, but will require eye drops daily for dry eye. His skin is a work in progress, but is getting better by the day. We have realized that Bogie can see shadows, so he gets around fine without assistance. He will need to be crated when no one is home because of slight separation anxiety. He will cry and scratch the door if he thinks you have left. He loves his toys and usually has one in his mouth at all times. He will let you take it from him, without incident, if you ask. He is fine around other dogs, and will give up food, or toys. He's great with kids, but because of his size, kids should be at least 6. He loves people, and even with his limited vision, he is fine with strangers & unfamiliar sounds. He does great with his baths, doesn't pull on a leash & loves car rides. We have realized that he is VERY sensitive to poultry and should not be fed anything containing it. Bogie is an AMAZING dog, and unless you were told, you wouldn't know he has sight issues. He is a BIG ball of wrinkles & love!!

February 19 update:  Meet Bogie! He came to BBR with multiple medical issues, including extensive eye problems. He has had surgery to remove masses on his eye lids and entropian, but there was a lot of scar tissue. We feel that Bogie very limited eye sight, and his forever home will need to take this into consideration. He loves being in his crate, and is totally house trained. He takes all of his medications like a champ. No fuss at all. He will follow you, or other dogs, around so he knows where he is going, but is content to lay on his pillow and chew on his football. He is so quiet and is just happy to be petted and talked to. We will add more information as we get to know him better!

Intake info:  Please meet Boogie!  He is 4 year old owner surrender.  Boogie was originally re-homed because other dogs in the home didn't seem to like him.  Turns out things were not so great in his new home, so he is now with us.  He's a pretty big guy at 80 pounds, and seems to be having skin issues and some problems with his eyes.  His is currently with out vet getting all checked out. We will post updates as they become available.

Thank you to my sponsors!:
Sirayakorn Aspery
Becky Burns