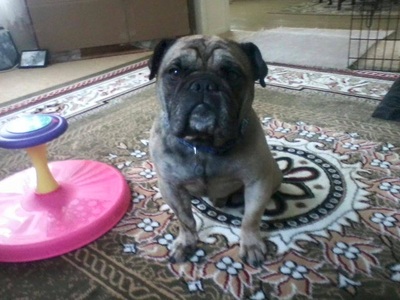 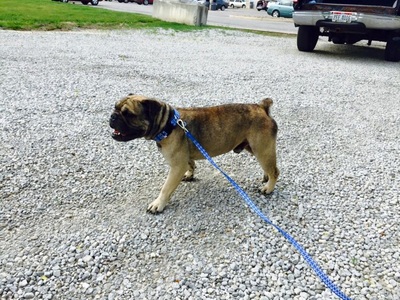 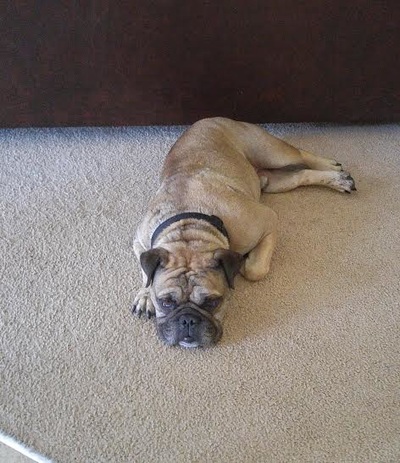 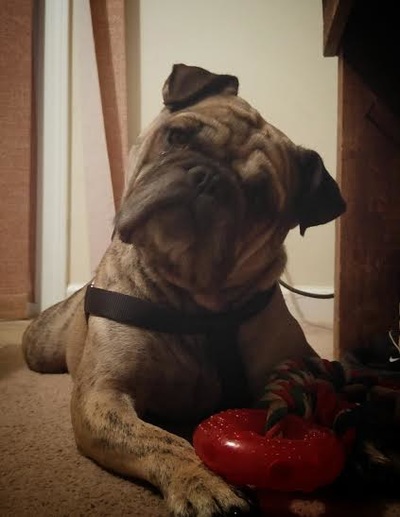 December 4 update:
Dinky is such a good boy. He is definitely the submissive one in a pack of dogs and has not shown any dominance with his two foster siblings. He is crate and house trained. He is not very good about letting you know that he has to go outside but had done well with being on a schedule and not having any accidents.

In the beginning, Dinky did not like the sound of high pitched noises and would run towards you but he has gotten a lot better with that and does not run towards you anymore. Now, he just looks at you and then continues with what he was previously doing. We are still working on his eating food from a human hand. He does not bite but just does not take the food gracefully from someone’s hand. He is getting better and with some more work, he should be a lot better.

At first, Dinky was very guarded and did not interact with anyone at first but as time has gone by, he is more social. Previously, he would not come near you unless he was invited to do so but now he likes to jump up on the couch and sit with you. He normally doesn’t jump in the bed unless you invite him to so. He is quite content sleeping on a pillow on the floor next to you.

Previously, someone mentioned that he does not like to go upstairs but there have not been any issues with him doing so. At first, he was hesitant and that was probably due to being in a new environment but now he will follow you upstairs all the time.

Overall, Dinky is a good boy and is quite shy at first but once he begins to trust those around him, he makes himself comfortable as one of the family. He has not shown any aggression and is becoming more and more playful each day.  He is not an overly active dog. He is quite content running around in the backyard and going for the occasional walk. Once inside, he likes to play with his toys and sit around in a chair or with someone, just depending on his mood. Dinky is quite independent and does not need his human to be around at all times. He does take some time to get adjusted to his surroundings but when he does, he makes himself one of the family.


Nov 12 update: Dinky has now been adopted and returned twice.  The first family decided that they wanted to start a family and his energy was too much for them.  The second family only had him not even a week and expressed concern about his behavior toward their children (jumping at their faces and lunging at kids on the other side of the fence) and he jumped up and nipped the grandmother on her chin when she was standing over top of him petting him.  Dinky has done great at our vet clinic and they say he's quite a character but does have a lot of puppy energy.  He's now in a foster home where we are further evaluating his needs/behavior.  As a stipulation of his adoption, training will be required to help this guy develop some manners and because of his lack of manners and the issues in the previous home, we are now requiring a fence and no children.

Sept. 22 update:  Dinky is looking for a forever home that will give him all the time and attention and he wants!  He does well with other dogs and cats.  Dinky is also needs a family who is willing and able to work with him and his manners.


July 5 update:  Dinky, was around about 10 kids this weekend all ages, did very well. He like to put his paws up when greeting but settles nicely. He hung with 3 other dogs and had a blast.  He was a party dog this weekend! Dinky is a pretty nice who dog acts like a puppy. A firm handler would be beneficial since he is still young.

June 28 update:  Dinky has been in his foster home for just a few days.  He is a very nice dog, and very well behaved in the house. He is a bit rough with the greetings - he gets a bit to excited, but not too. He did well with the grandkids, but so far would probably be est for older kids. Dinky hates the indoor steps in his foster home & won't go up them; however he doesn't mind the porch steps. He tends to eat like it is his last meal, but doesn't seem food aggressive. He wasn't trilled with his bath, but did not fuss. Dinky does well on walks, but does require a firm handler. He pulls a little, but does not drag you or anything.... you just have to keep a pretty short leash he wants to cross your path things like that.  Dinky is actually pretty nice walking buddy! He might be a runner, but not sure. He does well on the lead outside, no pulling etc. Sweet dog!!!!

Intake info:  Dinky comes to us from a shelter.  He's a smaller boy (possibly mixed with Pug?) and pretty high energy.  He was neutered and moved to his foster home.  He needs work on manners but seems to be house trained.