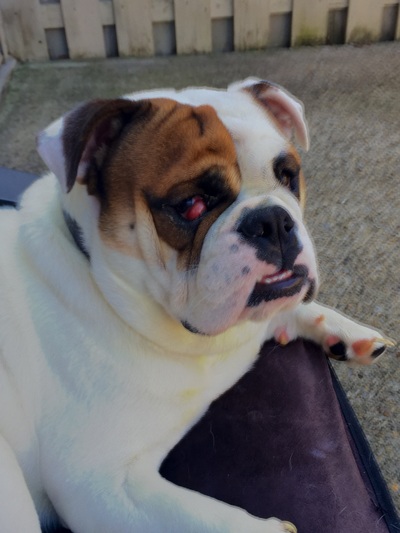 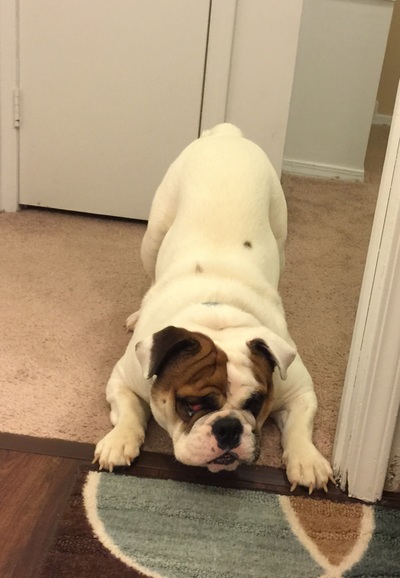 August 4 update:  Please met Mac!   The one-man party in a brown and white fur coat!  Mac was an owner surrender, who came to BBR when his person could not afford his medical care.  Mac has been in his foster home for a few weeks now, and he is a handful, but a lot of fun!  He is a clever boy, who has come a long way in the manners department and really seems eager to please. Mac loves to play, and sometimes he is a bit much for his foster brother Boston, who has special needs due to a spinal condition.  He would do great in a home with another energetic dog who can keep up with Mac’s agenda which is “play, play, play’!   We have not seen Mac interact with kids, but he is a sweet little soul, the only issue would stem from his penchant for jumping and a slight 'mouthiness' which might be too much for a young child.

When we first got him, Mac marked in the house a few times, but he quickly learned this is NOT how we roll, and he has been a lot better.  I am confident that once he is neutered, he will calm down and the marking will stop completely. Mac has been taking regular walks on the leash, and he is pulling less and less as he learns the ropes.  He gets very excited when he sees other dogs, and he can sometimes be a bit too enthusiastic in his approach, but again, we are working on that.  We live in a very dog friendly neighborhood, so he crosses paths with lots of other dogs on his walks, and we are trying to encourage him to be less overbearing.

We have not used a crate with Mac, he sleeps on the floor in our bedroom and is very good about staying upstairs and not getting into mischief at night.  His foster dad works from home, and Mac can be found most days, keeping Dad company in the office- napping intermittently and waiting for head rubs and belly scratches between meetings!  He and his foster brother are separated by a gate when we go out, and he has been very good and not at all destructive, although he loves to chew.  Any time we have caught him chewing inappropriately, we have been able to redirect him easily with a toy.

Mac is the first foster we have had who is not food or treat driven- the other day, when the lady in the bank gave him a treat he actually spit it out! He will eat his meals, but he picks and goes back a few times before he finishes. His weight is good, and his energy level is high, he is just not a chow hound! Overall, Mac is a sweetheart, and once his health issues are addressed, he will be a great dog for some lucky forever family.

Intake info:  Please welcome Mac!  This handsome fellow came to us as an owner surrender.  He will be seeing our vet to get all checked out.  We will update more as we get to know him better.  Some info on Mac from his previous owner:

Mac is a very good dog, he's almost completely housebroken, he just needs someone that will be home with him more often. He loves playing with his toys and he loves getting a bath. Mac also enjoys playing with other dogs. He is up to date on all vaccinations.  Mac has had one cherry eye removed, the other still needs to be taken care of, he has not been neutered yet either. The vet has also brought to attention the need to take care of his elongated soft palate, and he has been to an ortho specialist for radial growth abnormality. This surgery will be quite costly.