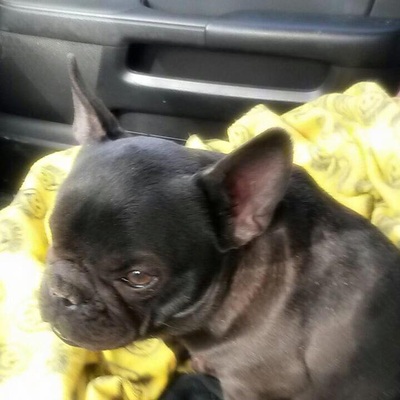 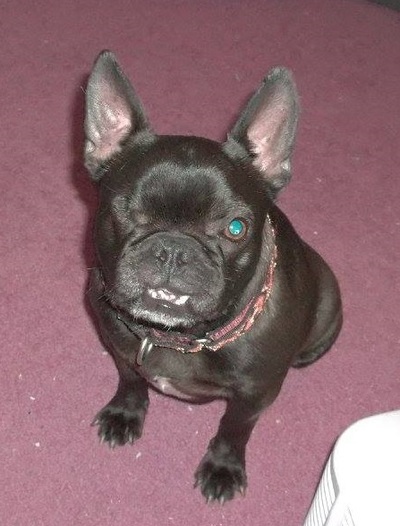 Intake date:  2/26/15
Last Update:  4/15/15
Age:  Estimated 2 years old
DOB:  Unknown
Gender:  Female, spayed
Weight:  approx. 16 pounds
Energy Level:  High
Color & Markings:  Brindle with white marking
Good with other dogs:  Yes, smaller dogs
Good with cats:  Unknown
Good with kids:  Kids need to be 8+
Object Aggression: None
Special Needs:  Missing her right eye
Medications:  None
Crate Trained:  Unknown
House Trained:  No, but making some progress
Physical Fence Required:  Would be best for her energy level and diminished sight (only one eye)
Adoption donation:  $500
Full bio (updated April 15):  Enter the diva, Miss Ruthie, a tiny brindle Frenchie princess with white markings on her underbelly and an adventuresome spirit! She is looking for her Prince or Princess Charming to complete her rescue and take her to her forever castle home where she can live happily ever after. Weighing in at not quite 15 pounds she could use a knight in shining armor to protect her from the dangers out there: stairs and dogs that are bigger and more aggressive and the world in general. Somewhere in her story, Princess Ruthie lost an eye which means she does not have good depth perception and can’t tell how close or far things are and could easily tumble down stairs or off ledges. Her new owner will need to be watchful or she could fall and knock the crown off that tiny little head of hers.

Cute as she is, this little princess needs finishing school (or reform school—it may be a tossup!). She is still working on her interpersonal skills and will chow down on any food available with the table manners of a piranha but is learning that the way to get a treat is to sit as quietly as possible. She still steals her foster doggie brother’s Nyla bones and chews on anything left lying around but is not intentionally destructive—just curious and she surrenders her ill gotten treasures easily when requested verbally. After living her life in “puppy mill” isolation she’s got a lot of catching up to do when it comes to her future kingdom and its subjects. Her house breaking is coming along nicely and if put outside she will pee and poop fairly consistently but she has a ways to go. She loves to nap curled up in her favorite, soft bed (which will go with her to her new home), is cooperative with the vet and very willing to be lick your face or hand. She has not been observed to be aggressive toward people but likes to play bite and wrestle with her Frenchie brother who is almost double her weight. She doesn’t seem intimidated by other dogs and would probably do best with canine buddies that are on the smaller side and not too aggressive. She doesn’t know how small and it might just get her in trouble if she approaches a larger aggressive dog or dogs; her remaining eye should be protected from attacks/damage (this would include from aggressive kitties as well). She loves to romp and play and likes to try and figure out why there are patches of sun on the floor. She will walk around and around sniffing the floor trying to figure out why the sun is just hanging out on the kitchen floor.

Princess Ruthie has a clean bill of health from the vet and is now on a regular regime and healed well from being spayed. The only problem is that she has some inward turned eye lashes that need watched for future treatment but she a bouncy and energetic little two-year-old(ish) lady looking for her new people…people who can teach her that human touch can be a gentle, positive thing in her life.

March 29 update:  Ruth seems to be coming out of her shell very nicely in her foster home. She's young so she has a lot of energy and LOVES to play with her foster Frenchie brother.  Hose training continues to be a work in progress, but she is improving.  She is learning how to function outside of living in a cage & navigating the world with one eye.

She would be a great dog for an apartment, condo, or a small yard.  A single-level home would be best as she has some difficulty navigating a lot of stairs, otherwise she would likely need to be carried up a full flight of stairs.

Intake info:  Welcome Ruth! She came to us as a breeder release.  Just a tiny little thing at only 15 lbs, she's estimated to be 2 years old, missing one eye and has some skin issues around her neck.  Despite her seemingly rough life so far, she is just as sweet as can be! She was spayed upon intake and we will post more once we've had time to evaluate her in a foster environment.