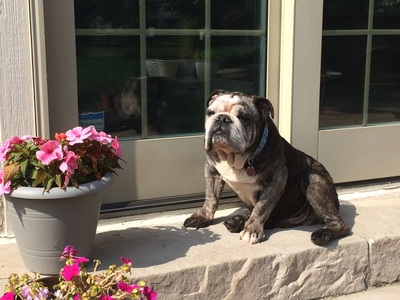 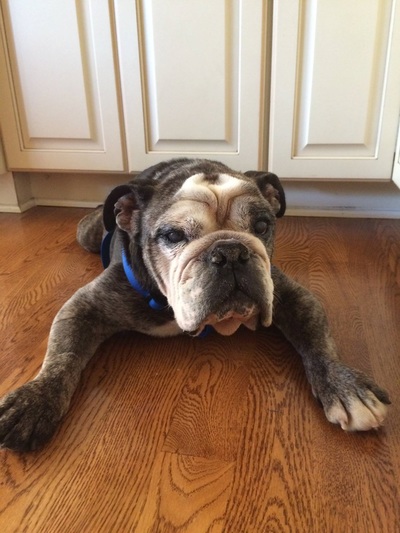 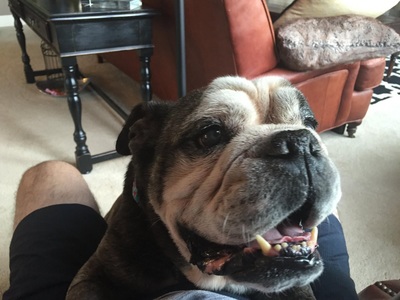 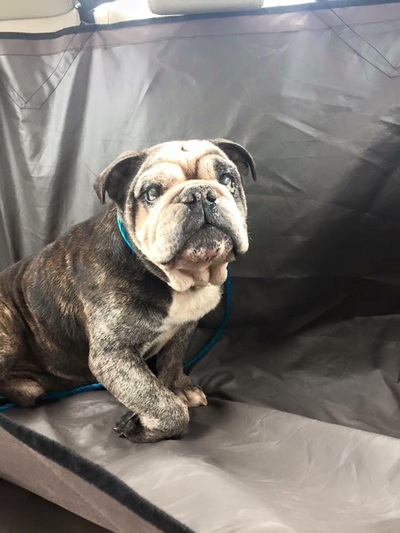 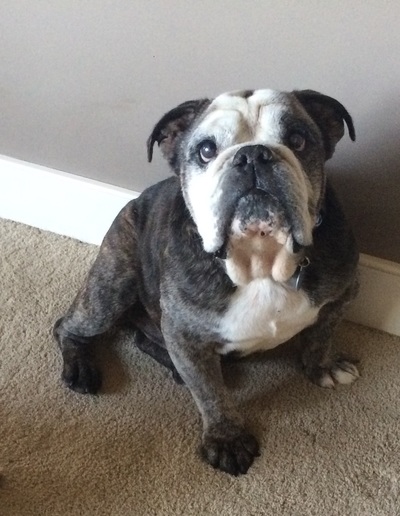 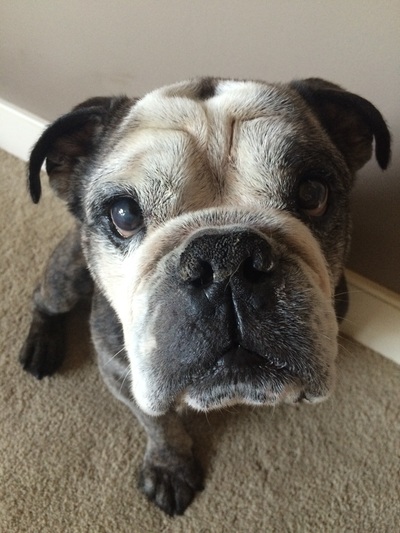 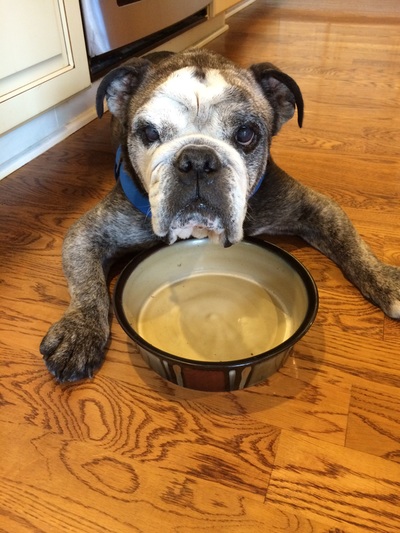 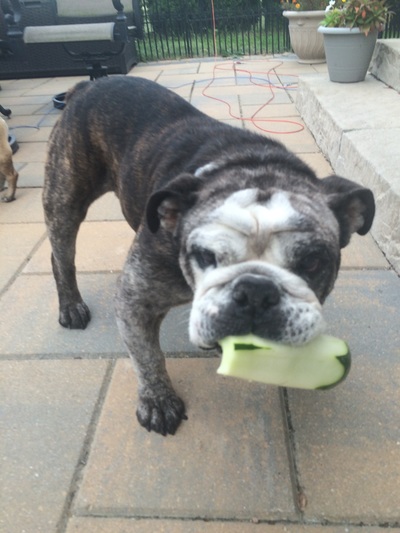 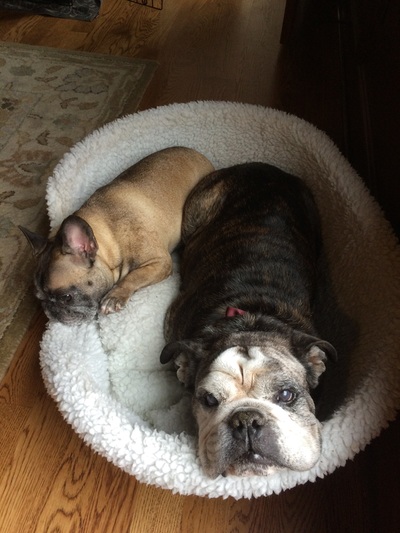 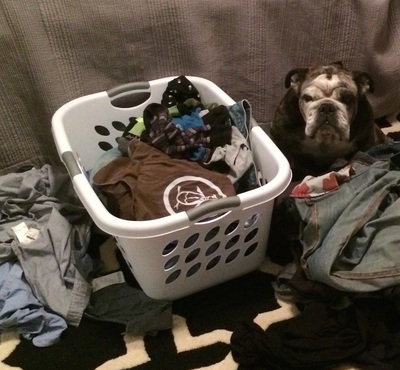 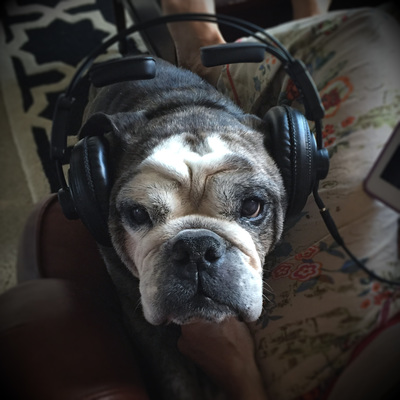 Intake Date:  July 10, 2015
Last Update: Oct. 4, 2015
Date Available: Sept. 3, 2015
Accepting Applications until:  we find him a suitable home
Age:  estimated 6-8 years old
DOB:  Unknown
Gender:  Male, neutered
Weight:  55 pounds
Energy:  Low
Color & Markings: Brindle with white facial markings
Good with other dogs:  Some.  I have not figured out a set rule to what kind of dog he gets along with.   He may be better off as an only dog.
Good with cats:  Unknown, but likely doesn't mind them.
Good with kids: Kids 8 years and older since he was a stray and came from a shelter
Object Aggression:  None
Special Needs:  His vision is not perfect, but he gets around fine.  He has severe dry eye that has caused his corneas to cloud.   He has been taking glucosamine chondroitin and Omega 3 supplements and they seem to be helping him with his well being.
Medications: Eye meds - Tacrolimus ointment and eye lubricant (OptixCare or Genteal) drops twice a day for life
Crate trained:  Yes
House trained:  Yes
Physical Fence Required:  No
Adoption donation:  $200

Titan is a lovable pup who would do well in a laid back home.  He is very happy going
for a ride in the car, surveying your kitchen skills, or just napping in the corner of the room where his people are.  He is a complete sweetheart who loves getting his big head scratched.   Now that Titan is getting settled into a routine he has become a very well behaved, easy dog.  Feed him and give him his meds twice a day and he's a happy guy. He doesn't fight when he gets his eye medications.  He doesn't really bark, unless it's necessary.  He doesn't chew things up.   He's house trained and crate trained.  Titan is a great companion dog looking for his home.

Despite Titan's dry eyes and subsequent vision problem he gets around fine.  He can't see a piece of brown food on a brown floor, but navigates around the house and yard just like a dog with normal vision.  He does stairs without problems.  He will not run up and down them, but can do large flights just fine.

Titan sleeps in his crate at night without a fuss, but I'm sure he would prefer a dog bed.

He is quiet, except the usual bulldog noises and doesn't even bark when the door bell rings.  He only barks when he wants in from being outside and he sometimes barks at other dogs.

He greets strangers like a gentleman.  He doesn't jump up on people but is excited to meet them nonetheless.  He has met a couple of children and it was largely uneventful, so he does fine with children.

He seeks out attention on occasion, and will put his head on you when he wants to be petted.  He will also jump up on you when you are seated, but not all the time, mostly he will just put his head on you.   He really only follows me religiously when I head into the kitchen and is always willing to help out with the cooking.  If only he knew how to do dishes.

He has been on a few walks and does not get very far, before it becomes apparent that he will go no further.  He's fine going for short distances.  He accompanied me to a soccer game and did not give me any problems getting to and from the field, so I guess it just depends on his mood.

Titan is unpredictable in what dogs he likes or doesn't like.  He and my female frenchie get along fantastic and have never had a fight.   He did not like my friends male terrier when he came over.  Titan likes my male frenchie, even though my male frenchie instigates fights with him almost daily.

He has not been exposed to much noise, so I'm not sure how he would react.  I dropped a box in the kitchen one day and he jumped back, very alarmed, but didn't make a sound.

Titan rolls around on his back, like a big goofball when he plays.   He hasn't taken an interest in playing with the resident dogs, stuffed toys or chew toys - he's easy.   He's pretty happy just finding a sunny spot to hang out in near his humans.  He does this adorable "happy dance" when he's excited to see you or when you are talking to him.    If you are looking for a really sweet, easy, chill companion,  Titan is your guy.


INTAKE INFO:  This poor guy comes to us from a shelter in Dayton.  We know very little about him at this time but will update as we learn more about him.